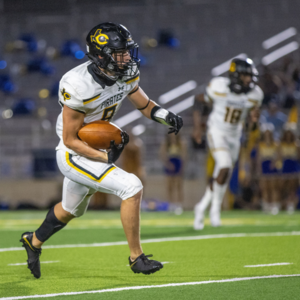 In the Pirates' 38-25 win over Jacksonville, Daugherty had three picks and ran one back 74 yards for a touchdown.
Sept. 30, 2020
Courtesy: Tess Demeyer, Dallas Morning News
Good things come in threes.

The 5-11, 180-pound senior safety ran one of those interceptions back 74 yards for a touchdown, and head coach Kyle Hardin said those highlights weren’t a fluke. The team sees them in practice all the time.

“He’s a very intelligent and very hard-working young man. He’s got a lot of instincts about him,” Hardin said of Daugherty. “He’s a guy that only knows one speed — full speed.”

Though Daugherty said he goes after the ball any time it goes up, he “was kind of surprised” when he came down with the pick six.

While studying film earlier in the week, he said he noticed the opposing quarterback “was a little inaccurate with his throws and he kind of overthrew his receivers. That’s what happened on two of [the interceptions], but one of them I saw that a receiver was wide open from a missed coverage, so I just ran over there and got it.”

In addition to Daugherty’s six points, Crandall’s defense added two safeties and held Jacksonville to 11 rushing yards, but Daugherty doesn’t think the team has played to its full potential yet.

“The first half we started off rough when we went down 12, but the second half we brought it back up. We played our game. I think we showed, at some points in the game, how good of a team we could be,” he said. “Once we knock off the rust I think we have a bright future.”

Last season, Crandall finished undefeated in district play and advanced to the third round of the playoffs for the first time since 1991, but the Pirates are under the direction of a new head coach this year. Kyle Hardin, a former offensive coordinator at McKinney North, was hired in June after Joe Dale Cary’s departure in May.

Entering the second game of Hardin’s tenure, Daugherty said he feels “very confident" and noted that the offense “has worked a lot on what they’re going to do this week” while the defense expects “a very physical week” preparing for Pine Tree.

“[Pine Tree] is a very physical and, from what we’ve heard, a very disciplined team," Daugherty added. "But I have the confidence that our defense can out there and pitch a really good game.”